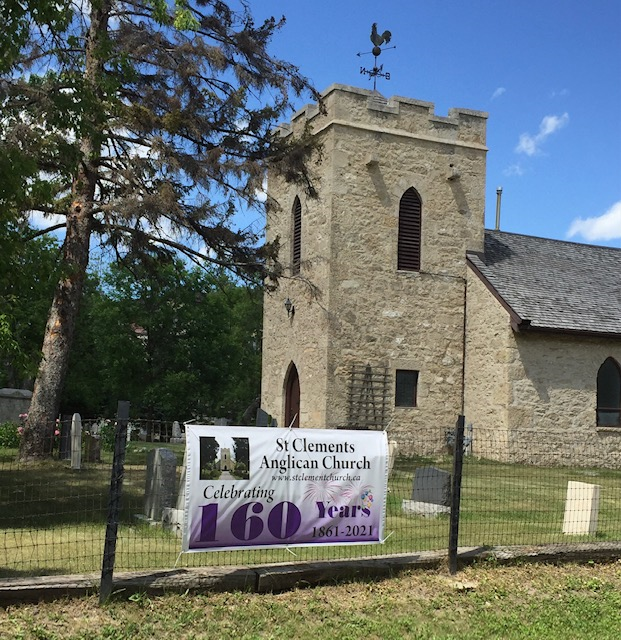 St Clements is humbled by the donation from Gilbart Funeral Home in the fall of 2021 of a granite bench to honor our 160th anniversary.  Please drop by and sit awhile! 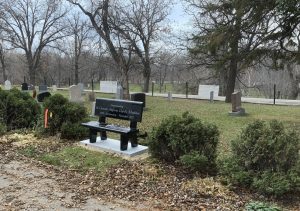 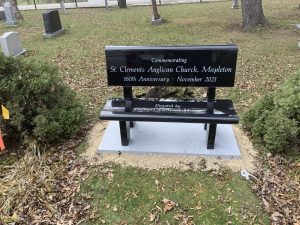 St Clements  Celebrated the 160th  Anniversary of the church in 2021.

Just south of the City of Selkirk, is found a Historic Gem of the Red River, known as St Clements Anglican Church.  The area known as Mapleton was once the stronghold of the Natives led by Chief Peguis.  The first settlers had arrived in the area in and in 1853 they built a school in which were also held the first worship services of what is now the congregation of St Clements.  This service was conducted one afternoon per week by the Rev Charles Hillier, who was the rector of St Peter’s Church.

In 1857 the diary of Rev Edwin Watkins states that a meeting had been held to make plans to build a church, and the idea “received cordial support and generous gifts of money and labor”.  An extensive diary of Samuel Taylor describes various stages of building, plastering, and painting that commenced on June 2, 1860.  The first service in the church was conducted by Rev David Anderson, the Bishop of Rupertsland, assisted by the Venerable Archdeacon Hunter on Dec 1, 1861.

The John West Bell that had disappeared from church history for more than 75 years appeared at St Clements and the bell was put up Nov 15, 1862 after dark at night, by fire and lantern and is a very romantic story in itself. The bell still tolls today.

At the instigation of the incumbent Rev Wilfred Thomas, plans were made to build a handsome stone tower at the entrance to the church.  The completion was long delayed by war and the problem raising funds.  But on July 15th1928 the tower was consecrated by the Most Reverend Samuel P. Matheson, Primate of All Canada, with two hundred and twenty five people attending the service.

St Clements occupied a unique and important position in the spiritual and educational development of the Red River settlement.  Its congregation included the rich and powerful, as well as the humble.  St Clements was for many years the official chapel of the Lower Fort Garry.

“… and on the first day of the week gallant gentlemen adventurers of the honorable Hudson’s Bay Company clad in broad cloth, and their ladies in silks and satin, made their way to this little House of God, and sat in seats reserved for their occupation.  St Clements was also, for some time, the garrison church of the lower Red River, and scarlet tunics added colour to many a scene of early Sabbath splendor.”

Times changed however, and the Lower Fort ceased to hold its important position in the trading of the Hudson Bay Company; the troops moved on to other quarters, and the identity of the congregation underwent great change.  No longer did the fashionable ladies and gentlemen of the mid Victorian era fill their accustomed pews in the church.  The voice of command as the soldiers arrived was no longer heard.  But there remained, and remains today a congregation of ordinary men and women who feel very keenly about their privilege and responsibility as stewards of St Clements both as the house of God and as a part of the history of the great Canadian west.