The Story of the John West Bell 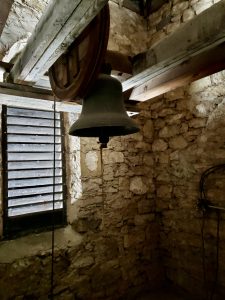 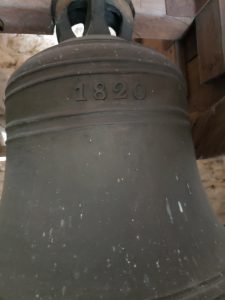 “Samuel Taylor (1812-1894) was born in the parish of Firth, Orkney, Scotland on 22 December 1812 and entered the service of the Hudson’s Bay Company in 1836. He worked as a stonemason and carpenter first in the Moose Factory area and later in the Red River Settlement. He married Nancy McKay in 1847 and they had eight children together. Nancy was a daughter of William McKay, a chief clerk and postmaster for the HBC. The Taylors lived in the Mapleton area and later had a farm in Selkirk. Samuel Taylor is interred in the cemetery at St. Clements Church, Mapleton, along with his wife Nancy and a number of his family members.

“Samuel Taylor’s personal journals spanning the years 1849-1869 record his work as a carpenter and stonemason for the Hudson’s Bay Company and later his life in the Red River Settlement. Amongst his many fascinating entries is one for November 15, 1862 that is of particular interest to me. He describes a dark and cold evening when workers struggled under difficult conditions to erect a new bell at St. Clements, Mapleton Church (near Selkirk, Manitoba). They likely were working against time to have it mounted before Sunday services the next day. Taylor did the stonework on St. Clements Church built a year earlier. Samuel Taylor writes in his journal simply and understated:

‘There was a fine bell put up at St. Clement’s on Saturday 15 after dark at night with fire and lantern light.’

“The bell erected at St. Clement’s Church on November 15th, 1862, was no ordinary bell.  It was the original bell that came to the Red River Settlement with the first Anglican Missionary, The Reverend John West, in 1820 so it is 200 years old this year!  It was mounted at the first Church Missionary Establishment which later became St. John’s Cathedral in the north end of Winnipeg.  The bell was moved to St. Clement’s when the 1862 Cathedral was built. John West’s bell continues to welcome the congregation to services at St. Clement’s Church to this day.  This story is detailed in a Winnipeg Free Press article written by historian and author, Margaret Arnett Mcleod, published in 1937 and reproduced with permission in a Diocese of Rupert’s Land publication, Centenary 1861-1961, St. Clement’s Church Mapleton.  It took quite a bit of detective work on Margaret Arnett Macleod’s part to discover that the John West bell had been moved to St. Clement’s, since at the time few were aware of its whereabouts, only that it was likely installed in one of the river churches.

“Samuel Taylor’s journals are not only a remarkable record of daily life in the Red River Settlement, they demonstrate that the history of Manitoba, the Hudson’s Bay Company and the Anglican Church in Western Canada are interwoven – all three celebrating significant anniversaries this year!  They also demonstrate how records from the Hudson’s Bay Company Archives, the private holdings of the Archives of Manitoba and the records of Red River Settlement churches complement one another in providing a full and rich picture of how our province developed over time.”

In October 1857, the people from the area started attending an afternoon church service in Mapleton School. It was then that a meeting was held to make plans to build a church.

In 1860 the building of the church began by Samuel Taylor and volunteer labour. Samuel Taylor was a stonemason who had moved with his family to the Mapleton area in 1857 from Moose Factory, Ontario, having been in the service of the Hudson’s Bay Company there for 21 years. His personal journals survive in the Archives of Manitoba where he describes the construction of the church (Archives of Manitoba P4641/1).  The first service in the church was in November 1861.

The church’s architecture is described in detail in the Autumn, 1997 edition of Manitoba History magazine, published by the Manitoba Historical Society (Historical Tour: Selkirk Manitoba by Wendy Smulan):

The building is a sturdy stone structure in the English Parish Gothic Revival style with crenellation crowning the bell tower and pointed arch windows and door. The entry to the chapel is through the bell tower where one may see the thickness of the stone walls by the inset windows. The chapel is simple, but has beautiful stained glass windows that are best seen from the interior. The masonry work is very rustic. Finer cut stones provide subtle contrast which highlight the door and windows as well as the crenellated battlements and molding on the bell tower.

The bell at St. Clements is older than the church itself. It came from England with Rev. John West, the first missionary of the Church of England to western Canada in 1820, via the Hudson’s Bay then by York boat to Winnipeg. The bell was noted in the ships’ log in the 1820 trip from England. It was first installed in the Upper Church that was the predecessor of St. John’s Cathedral, Winnipeg. After the construction of the Cathedral, the old bell was donated to St. Clements in 1862, to continue its ringing by the Red River, albeit many miles downstream.

The raising of the bell in 1862 was told in a romantic story by Samuel Taylor.  His journal entry for November 15, 1862 describes a dark and cold evening when workman struggled under difficult conditions to erect a new bell at St. Clements. They likely were working against time to have it mounted before Sunday services the next day.  Samuel Taylor’s comment was simple and understated:

“There was a fine bell put up at St. Clement’s on Saturday 15

after dark at night with fire and lantern light.”

The rooster weathervane atop the bell tower was a common sight in many rural European Churches in the 19th century. At Christ’s betrayal by Judas, Saint Peter publically denied Jesus 3 times before the rooster crowed; Our weathervane reminds us we are not to deny Christ.

The Bell Tower was added in 1928, after a long-delayed completion due to the war and problems raising the funds. (The bell hung from a wooden tower set back from the church prior to that time). On July 15, 1928, the tower was consecrated by the Most Reverend Samuel Pritchard Matheson, Primate of Canada, with 225 people attending the service!

For years St. Clements congregation included the rich, the powerful, and the humble.  For many years it was the official chapel of the Lower Fort Garry.  It is stated that gallant gentlemen, adventurers of the honorable Hudson’s Bay Company, clad in broad cloth, and their ladies in silks and satin, made their way to this little house of God, and sat in seats reserved for their occupation.  For some time, St. Clements was also the garrison church of the lower Red River, and scarlet tunics added colour the scene of the Sabbath splendor. These gallant people sat beside the humble people of the area.

But times changed and the Lower Fort ceased to hold its important position in the trading of the Hudson Bay Company. The Troops moved on to other quarters.  No longer did the fashionable ladies and gentlemen of the mid-Victorian era fill the pews. But there remained, and remains today a congregation of ordinary men and women who are keen about their responsibility as stewards of St. Clements.

The window over the altar is in memory of the children buried in the churchyard and was installed by parents circa 1890-1902, during the incumbency of Reverend C.R. Littler.

The first stained-glass window nearest the altar on the Epistle side of the nave (right hand side of the church if you are facing the altar) representing our Lord carrying His Cross, is a memorial to the men of the parish who died in the First World War and was installed in approximately 1920.

The second stained-glass window on the Epistle side of the nave (right hand side of the church as you face the altar) depicting the Apostle St. Paul was donated by the Pruden family in memory of Paul and Nancy Pruden.

The first window closest to the altar on the Gospel side of the nave (left hand side of the church as you face the altar), the most recent stained-glass window, celebrates the 150th anniversary of the church in 2011 and was installed as a result of funds raised by the congregation.

The second stained-glass window on the Gospel side of the nave (right-hand side of the church as you face the altar) depicting the Apostle St. Luke.  This window was erected by the parish in 1960 to celebrate the Centennial, or 100th year anniversary of the church. This window is dedicated to the memory of Samuel Taylor, “Diarist and Builder of this Church” and his grand-daughter, Alexis Taylor attended the service that day. This window was designed by well known Manitoba artist, Leo Mol, who also has designed many sculptures that stand proudly in the Assiniboine Park Garden in Winnipeg

Two handmade chairs were crafted by Mr. Martier, a Metis soldier from the first Riel rebellion and were subsequently donated to the Church by Col. S. L. Bedson, the Warden of the penitentiary at Lower Fort Garry.

The church altar and the altar rail and one small table to the east side of the altar are all original to 1861.

Meaning:  an elective body in an Episcopal parish composed of the rector and a group of elected parishioners who administer the temporal affairs of the parish

We are presently going through the St Clements vestry information, as there is quite a bit of info on file   But one interesting fact we found was that WOMEN were first elected on the St Clements Church vestry only in 1970

The actual name is St Clements Church Yard, and is inter-denominational.  It is not an Anglican churchyard. St Clements is its keeper.

The approximately 7 acres of land holds over 10,000 graves.  The graves are all marked and the names have been kept on a database.  Anyone looking for their loved one’s graves, are encouraged to contact us, as it is most likely that we can direct them to the grave of their loved one.

The first grave was a child buried before the church was built Sept 1861. The land was consecrated and the child buried. There are now 4 areas for babies.

There are over 400 headstones for those who died at war.

The oldest headstone that we can read is dated 1867 and is located just outside of the doors of the church.

Samuel Taylor, who built the church, is buried in the family plot behind the church in the in 1896.

There is a section of the graveyard that has been requested specific for the Baha’i Faith.

There is a section of the graveyard used for the City of Selkirk- Province of Manitoba for those who cannot afford their own funeral and do not have another place to be laid to rest.

In 2005 the church decided to utilize some of their land, and the parish made a decision to sponsor a 55 Plus Seniors Life Lease building. Construction commenced and the building opened in June 2010.  Mapleton Lane is a five-story building, with 49 suites is situated north of the church.  The board of directors is made up of church members, and houses some 80 seniors, allowing them to remain in the community without having to maintain their own homes.